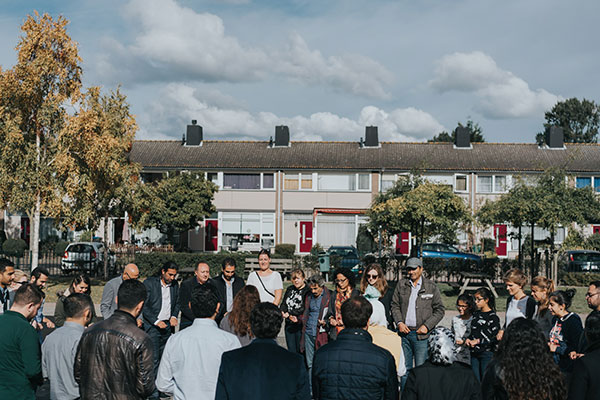 As part of the joint project cooperation between Globally connected and International Alert A number of people 13 participants coming from different Eu states (Netherlands, Germany, France, Denmark) who came together under the EU funded program Active voices took place in Zandaam to design and look into their Action research results where they can design their community action along with the hosting communities in some of the EU members states.

Active Voices: Coming together for a second time in Zandaam

Written by: Zita Luiten and Yara El Moussaoui
Syria’s ongoing conflict has left the country and its people scattered and shattered, with over 11 million refugees all over Europe and the Middle East. No longer able to dream of going back, they all have to face the reality that most of them are to stay. This creates challenges and gaps. How do refugees fully integrate into a new society and still stay connected to their Syrian identity? How do they lose the title ‘refugee’ and still feel like a united Syrian people? Active Voices gathers Syrians to tackle this problem exactly. It’s no secret that in any country that allows refugees, there is a problem of integration. Refugees are facing a big challenge of integrating into a completely different society, while often facing harsher judgements than any other. There’s a strict eye on you. And you have to find the balance of integrating into a new society, but also preserving your own culture and identity.

While many refugees are left to do this alone, there is a group of Syrian refugees who have gathered forces to help each other with this problem, and they call themselves Active Voices (Aswat Faeela). They are young refugees who live either in Europe, the Middle East or in Syria, who want to have a voice and help Syrians everywhere. How do refugees integrate better into their host communities? And how do we help people within Syria? Or refugees in neighboring countries? These are the type of questions they try to answer. In the weekend of 20-21 January 2018, a collection of this group came together in Amsterdam for a workshop. Obai, the facilitator of the workshop, says: “It all started in July 2017, when we (a small group of Syrians in Europe) decided to conduct a series of in-depth social research in every area, so we can learn more about the life of Syrians, their relationships with each other, their relationship with the host community, and their relationship with the Syrians who are still in Syria. Engaging around 1750 Syrians, we researched the best ways we can help improve their reality in Europe, the Middle East or in Syria.”

All within their respective host communities, these young active voices reached out to fellow Syrians and interviewed them, held focus groups and talked to people from the host communities to try and find out what is the best way to help Syrians everywhere.
All these active voices are in way ambassadors. But more than that, these young people are bridges. They are bridging gaps between Syrians everywhere, and bridging gaps between Syrians and their host communities. They are coming from a place of war, continuing onto what sometimes can only be called a journey of horror, reaching a new community, but then not merely settling down into this community. They are working hard to improve their role in this society, and their role in the Syrian crisis all over the world. Their revolution goes on.